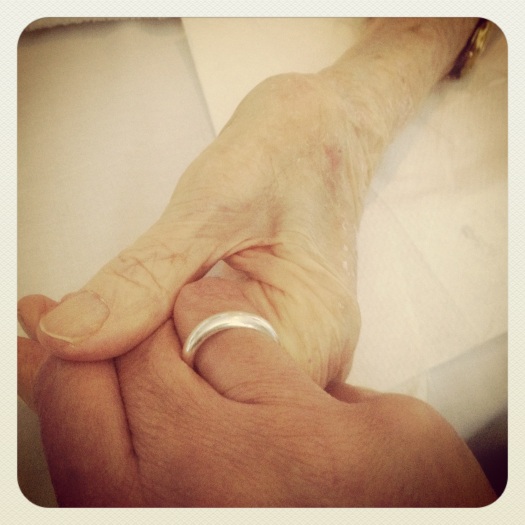 Her piano-playing fingers are swollen. Blue. It is not the hand I know. The one that has done so much touching, grasping, stroking, holding is in there somewhere, beneath the oedema. Today the memory of her bones are gone. The paper of her skin has turned to something like flesh. I think of Hansel and Gretel tricking the witch with their chicken bones instead of fingers. Too skinny,  the wicked witch would say. Not yet ripe for the cooking pot. What horror it made you feel as a child. Now I hold her hand, searching for the memory of it. Where have my mother’s hands gone? The image of them remains concrete. It cannot be changed. I hold it in my mind.

People who love her visit. They are shocked to find her non-contactable. June is there still, I say. The nurses said she could hear you if you spoke to her. I don’t know if this is true. To me she is asleep. And what do you hear when you are asleep? Your dreams. But this comforts those who visit. They sit and hold the puffy-not-her-hand and tell June how much she meant to them. They cry and say they love her. I give them some space to be beside her because they have only a visit and I have? How long have I to go?

Part of me feels as if she is on display. Some kind of exhibit. I am the museum guard. Making sure they don’t touch the artwork. Don’t nick anything. This is absurd. But there it is.

Maybe not having had the experience of being close to death makes us awkward. Our mind chooses other things to liken it to. I think of those red plaited ropes they set up in movie cinemas to make you form a queue for the box office. I think of those retractable barriers in airports that corral you into a zig zag line, heaving your unwieldy bag behind you. Even death has a form, a way of being. Form a neat queue behind the yellow line people.

There is sludge in the urinary catheter tube that leaves her body and fills a bag by the bed. It is not what is supposed to be in urine. The antibiotics are still not working.

Her lips are cracking. With a cotton-tipped bud I apply the lanolin. It is white and smeary. I like these tasks. I wish for more of them. I straighten the blankets. I smooth the sheets. I stroke her hairline. There is an inch or so of white hair now. Her hair is growing despite everything. She missed her last hairdressing appointment because of feeling unwell. She would hate the state of her hair.

Her tongue has some red blotches on it. It lies in her half-open mouth, flipped on its side, like a slug without its shell. Her breathing is slow and monotonous. It does not seem to be weakening. My sister will arrive tonight at 6pm. It’s not far off. Five hours.

At 1pm the nurse visits and they reposition her. We decide not to give June more morphine. She has been unchanged since her first dose and the nurse thinks that if she is dosed again she will not be alive for my sister.

I sit and watch her. I film her on my phone. I have captured her.

She would hate that I am doing all this. Recording such melancholia. She used to say, why can’t you write about happy things? She pushed away the deep and dark. She wanted lightness, frivolity, entertainment. She wanted Kate and Will’s wedding on the TV. She wanted a Silver Jubilee parade. She wanted baby pictures of the Danish Royals and for Molly Meldrum to pull through.

The silver chain nurse comes and examines her and gives her more intravenous antibiotics. We chat. When it comes time for him to leave he says, I won’t see you tomorrow. I answer, Oh.

I go through my mother’s address book for familiar names of people I should tell. I see a name Dossie. It is a name I know. Dossie this, Dossie that. But I have never met a Dossie. The number is a Sydney number. I ring it and tell the woman who answers that I am calling to tell Dossie some news. This is Dossie’s daughter, the woman says. Dossie died a couple of months ago and I wanted to tell June but hadn’t managed it yet. She is glad I called. Our mothers were close childhood friends. They played in each other’s yards. They put ribbons in one another’s hair. They had the same knee-high socks. They whispered through the pickets about boys. They stayed in touch for eighty years.

I am writing when I realise I have not heard her breathing and I look up from my notebook and spend a still moment watching the bed clothes. There is no rise or fall. I know instantly she is gone. I go closer. I go to the side she faces and look at her motionless face and watch it for a breath, for a sound. Oh. My first thought is that I was not paying attention. I should have been holding her hand. My second thought is of my sister. She has missed her. She is about an hour from landing.

Any moment now Graham and Jasper will be here to swap cars and go to the airport to collect Lisa.

I touch her forehead. I hold her hand. I watch her. My phone rings. It is my brother-in-law. He will be the first person to hear the words she’s gone. He is not expecting this.

Graham and Jasper arrive minutes later. Her hands are bleaching. No longer blue, but a deathly beige. Waxen. I tell them I will just sit with her till they bring Lisa. I will not tell anyone she has died. I want to keep it a secret for as long as I can. I want her to be like this when Lisa arrives.

I manage about forty minutes, just my mother and me, before a carer comes in with a cup of tea for me. I have to tell her June’s passed away. It seems wrong to not say. Are you certain? she asks. Oh yes, I’m sure. She is a little panicked by the fact that no one but us knows this fact and she must tell someone she says, and off she runs. Soon the doctor and nurse are in the room. I stand back. The doctor even warms his stethoscope on his own chest before he checks her for a heart beat. I guess it is automatic. We sit and talk about June. The doctor is sad. His sadness feels real. She had such a love for life, he says. I bet she gave a good party, he says.

I try to remember her parties. It is hard at first with so much death in the room. She loved celebration. I think of a surprise party she told me about that she had arranged for my father. It was for his fortieth birthday. We were only toddlers. She had no way of hiding from him the beer bottles in the bath, so instead she told him he would have to pretend to be surprised. And he went along with it. Faking astonishment to all their friends. She would have made devils on horseback and asparagus rolls. She would have worn strappy gold sandals and orange lipstick. The house would have been filled with the scent of Sweet Pea.

3 Replies to “Day Three of Dying”