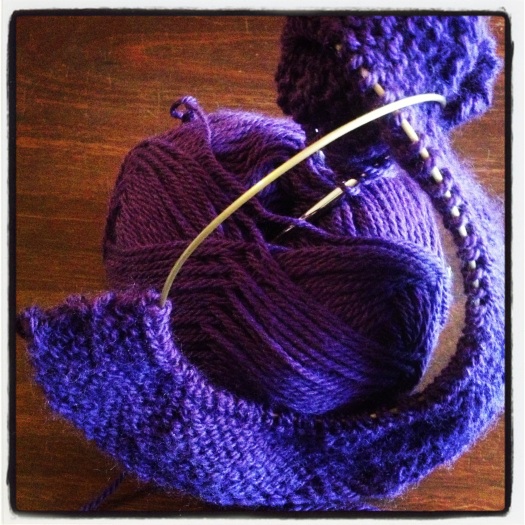 Jasper says, “I wish I could knit on the couch while the TV is on, like you do…”

“I can teach you. What do you want to knit?”

A free-off-the-web beanie pattern is downloaded. A spare ball of wool is located from the cardboard box beneath the bed. Ninety stitches are cast on. I show him how to knit a stitch.

It is not easy for boy hands. The task is delicate and dainty and very much a sitting still activity. But he is inspired by it. It is repetitious. You get better at it quickly. The thing you are making is growing before your eyes. Be it slowly. Lucky to have knitting when you are at home with a head cold. When the outside is beautiful and still and clear and crisp. But you have a sore throat and a runny nose and a heaviness to your head. And just inhaling the air is making you cough. No outside for you.

Mistakes are plentiful. Bumps where bumps should not be. Holes where holes are not. But knitting is forgiving. Just keep going. A wonky stitch will not ruin the thing. It is a good lesson for him to learn – the boy who hates smudges on paper, or creases on books. The boy who adjusts his singlet and then takes it off. Who checks the used-by-date on his Mocha milk before purchase. A knitted beanie, I tell him, doesn’t need every stitch to be straight. You will see. A few gaps here and there add character, Fremantleness. It will be better because you made it. Because it grew from you. From your industrious hands.

It struck him, momentarily, that knitting was a thing girls did. He sees no males do it. When we searched online for men and knitting the only knitting males involved themselves in was speed-knitting, their hands moving like machines. Needles like drum sticks. How to ruin knitting – turn it into a competition. But something about knitting overrode the girl-thing.

And then there is the sheer joy of a mind-numbing activity. I don’t think enough people appreciate the peace that comes with doing the same thing over and over. Like the person who doodles flowers or stars. Runners get it. Like the swimmer doing lap after lap. Swimming and knitting and meditation and breathing. All the same.

Dogs know the power of repetition. They know the joy of monotony and predictability. They strive on routine and regularity. It mends the mind. Awash in oodles of serotonin, my dog spends all day on the couch. He needs no surprises. He wants for no deliveries, or new friends. At 2.30 pm he begins to predict the school pick up time. He shuffles and rises when he hears me ready myself to leave the house. It is not all he gets but it is one of the predictable walks he longs for. He stretches and arches and shakes off. He will pee on at least three of the Stobie poles. He will mark the dustbin on the corner. He will drag his butt on the braille-for-the-feet street crossing. Knowing him completely is part of his charm. His presentation of his Kong on greeting. His knitting-like nature. Day after day. If he were ill, it would be immediately obvious.

The activities that quieten my mind always seem to have a repetitious nature to them. Like scrubbing the sink. The squirt of the Jiff. The way it doesn’t lift the grime without some effort. Not like on the commercial. One wipe and it is gone. It does require scrubbing. But that is part of it. If wiping were all you wanted, you would not be at the sink with a scourer.