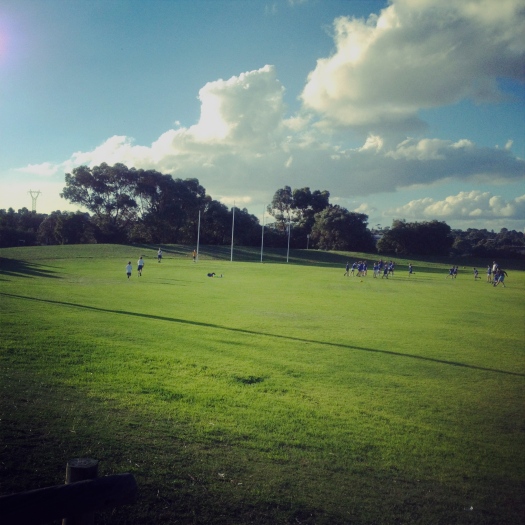 It is Tuesday afternoon in the middle of May. Time to collect the boy from the entrance of the Fremantle Arts Centre where we meet after school. I am always early and I look at my phone while I wait for him. The Virginia creeper has turned crimson. I take pictures with my phone of clouds and edit them with Instagram. The dog waits patiently too, on the warm bitumen, moving only if he has sat on a trail of ants. His nose is wet and twitching. Waiting for the smell of his boy. Sometimes he is tricked by the shape of another person coming down the hill and he gets up, prematurely, and starts wagging his bum. Then he realises it is not his human and flops back down. Then the familiar slap of his sand shoe. Then maybe the whiff that only a dog can sense. The smell of him hits the Murphy’s nose and the wag becomes sincere.

“How was the test?” It was NAPLAN today. Persuasive writing. The question was; Why cook at home? He was happy with his response. His kicker was that if you got really good at cooking you could become a contestant on Masterchef.

We have football. “Get your boots on.” I have his mouth guard. I have his things ready. It’s what I do.

After footy he is hot, even though it is getting dark and he has lots of bare skin. We arrive home and he is going to go over to the neighbour’s because I am off to a talk by Celia Lashlie; On Turning Gorgeous Boys into Good Men. From our car parking spot outside our fence we can see three dodgy types by the stairs that lead onto the park. Jasper says, Drunks Mum. My neighbour will give Jasper dinner and then Graham will pick him up when he finishes work at 7pm. Jasper is eager to get to the neighbour’s and play with his mate and wants to go over straight from the car. He wants to dump his boots on me. He wants me to hand him the house keys so he can race ahead. But I want him to wait for me, so I can lock my car. After all the drunks might be watching. Also I want him to put more clothes on. “No you cannot go over in your footy shorts and that top. Come inside and change into long pants and a wind cheater.” We have our familiar to and fro. He gets shitty with me. I persist.

It is so mundane and so well-known to mothers. We hate the sound of ourselves, but can’t turn ourselves off. I am thinking why can’t you just do what I want you to do.

He does some storming around but changes into jeans and a sweater and is over the fence and at the neighbour’s. Barely a good-bye. I think, well at least he is warm. I have half an hour before I need to leave to go to the talk. Long enough to heat some left-overs in the microwave, switch off the lounge room light and sit but the window and watch the drunks on the steps by the park. They are twenty feet away but it is as if they are in the next room. Hey, she yells. I sit in the dark with my Malaysian curry left-over on my lap and watch them while I eat. I am forking food into my mouth, and peering from my blackness through slatted cedar blinds, into the growing dusk and cooling night at three drunks on the steps, as if I am watching the television. Hey. A man sits half way up the limestone steps and in front of his splayed legs on the step below is a woman. Prancing about in front of them is a younger man. He is spider-like – perhaps he has sniffed something. He is leaner and taller than the other two. He wears black jeans and a singlet top. He could be in his late teens. The man seated is in a red t-shirt and he has pale skin and a three-day growth. He looks mid thirties. The woman is of an indiscriminate age – somewhere around her twenties or thirties. She has smudgy makeup and a pudgy torso. Her body has lost its youthfulness. She wears black leggings and a low-cut black top that reveals her cleavage and sagging breasts. Hey. The man she has wedged into has his hand across her bare front but is not really fondling her, more just drawing her back into him. Making sure she stays put. She cranes her neck back and around and they start kissing while the lanky man drains some liquid into the funnel of his mouth from the silver bladder from a cask of wine held high. Red shirt is sucking the face of the woman and lets his hand with the cigarette hang down near his side. Lanky man comes round to the base of the steps and eases the cigarette from the hand of red shirt. The couple break off from kissing and yell at one another. Hey. They have a phone between them and are holding it out from them and looking at it. I guess they’re taking a photo. The woman has a green and black checked cap on. Lanky man takes it from her head and she yells at him. Hey. Some tinny music plays from the phone and lanky man dances around in front of them. The couple go back to kissing. Lanky man squats down and watches them, swaying a little on his haunches.

It is getting dark.

The talk is at a posh boys school, full of other western suburb parents of teenage boys. Most of the women are blonde.

Celia Lashlie tells the audience of would-be perfect parents that we need to let go. Over two hours of stories she tells us that we need to help boys find their own intuition and learn to access their own feelings by not riding over the top of them with our mother-need to fill in the empty space. If we ask them a question about how they feel we might need to wait two days for them to answer it, but leave the space for silence. There was a lot of knowing laughter as she held a mirror up to us mothers. Descriptions of women nagging men to put out the rubbish could easily have been from my house. In our desire and want to keep our boys safe we take away their ability to look after themselves. She told the fathers that the boys would walk over broken glass to have themselves seen by them. Fathers; see your boys. She told mothers that we stood atop a box of love. As she illuminated us to ourselves there was that spine tingling feeling and that moist eyed awareness that what she spoke of was wise and true.

When I got home the drunks had gone. The steps were empty and cold, the silver bag deflated and left. I wondered about the parents of the drunks. And who do they parent now?