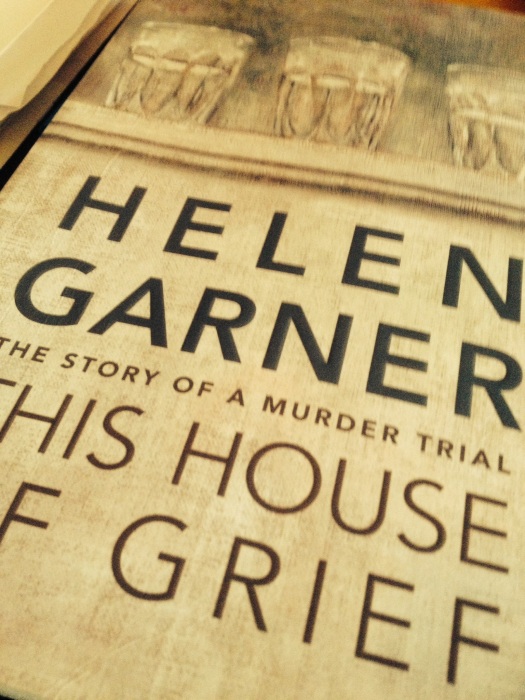 I have just finished reading Helen Garner’s This House of Grief. It is a remarkable achievement, especially since the story is so well-known that there is virtually no opportunity to create suspense. Yet it is suspenseful. It is not suspense as to the outcome of the trial. It is suspense over what will Helen think? How will the experience end up for her? What will she feel after having witnessed, day after day, the trawling, the mucking out of people’s lives? Since Helen is us – the reader – she asks the same questions. She has the same doubts over innocence, the same tingling in her gut. She is not frightened to tell us.

“One day, when court rose for lunch, I took my sandwich to the Flagstaff Gardens and lay on the grass under a tree. Why had Farquharson, during the first trial flashed outraged grimaces and vehement head-shakings at his sisters whenever the word ‘suicide’ was mentioned? Was there a moral register on which suicide was more disgraceful than murder? Perhaps the most shaming thing of all, a failure of nerve that no ‘Anglo-Saxon country bloke’ could possibly admit to, would be to launch a murder-suicide and not complete the act. I recalled a famous Sydney story about a man who threw himself off the Gap and was caught before he hit the rocks by a huge and timely wave. The coastguard vessel picked him up unhurt. ‘The minute your feet leave the ground,’ the saved man said, ‘you change your mind.’ An American mother I read about drove her car full of children into a river; she drowned and so did all her kids except the eldest, a ten-year-old, who fought his way across her lap and out through a part-open window. He told police that as the car began to sink his mother had cried out, ‘I made a mistake. I made a mistake.’

Was the core of the whole phenomenon a failure of imagination, an inability to see any further forward than the fantasy of one clean stroke that would put an end to humiliation and pain?

Cindy Gambino had observed that Farquharson had become a better father after their break-up. Perhaps a hard-working husband is screened from his children by the domestically powerful and emotionally competent presence of his wife. When the marriage ends and access visits begin, he has to deal with the kids on his own. He is shocked at first, finds his new duties exhausting and difficult and often tedious; but gradually, by virtue of this unmediated contact, the children’s reality penetrates his armour and flows into his nerves, his blood. Now that he knows them, and knows their love, his exile from their daily life causes him a sharper suffering. To a man who is emotionally immature, bereft of intellectual equipment and concepts, lacking in sustaining friendships outside his family, his children may appear to be not only the locus of his pain, but also the source and cause of it. If only he could put an end to it – amputate or obliterate this wounded part of him that will not stop aching! As the judge in the first trial put it in his sentencing, he forms a dark contemplation…

I watched the thought, to see what it would do. It firmed up, like jelly setting. And there is sat, quivering, filling all the available space.”