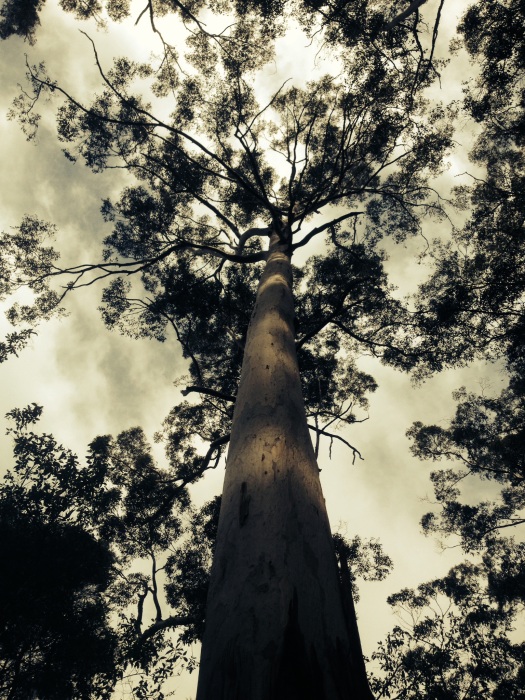 We drive through constant rain in a car that knows it is raining and switches its own wind screen wipers off and on.

So different from the leaking Kombi. No protruding springs through ripped ruby vinyl. No view of the bitumen rushing beneath.

Even the seats are heated.

We are without child. Sans enfant. For we are celebrating twenty years of union. To those we can’t be bothered to tell we aren’t married, we says its our “wedding anniversary.”

In a car without our child there is a lot of silence. It is not brooding. Just comfortable. No need to speak. There is also our own choice of music. Bill Callahan. There is the retelling of the This American Life episode, but without Ira Glass’ enigmatic style. I feel a school girl-like glee to be on our own.

We are heading to the forest. Here the trees are tall and straight; good for the masts of tall ships and once used to paved the streets of London. But how much better to be standing here still, pushing skywards. To be beneath them is to be made midget in the most majestic of ways. This corner of bush hangs on in this damp and undulating part of the south-west. The ground is soggy. Water sits on its surface in large puddles and rushes in streams down the sides of roads. But, it is a timber town still. Rednecks have stickers on their utes, “Die Greenie scum.” Pastures are press studded with the black dots of Angus cattle. We see emus. We are constantly surprised by green. Green this fluorescent is a rarity in Western Australia.

At a town on the way we eat a BLT and a burger. A group of sixty-somethings sit around another laminex table in the same cafe. “One day we will be them,” says Graham. “You will wear a cardigan like that.”

An antique shop in the town has a sign on the door advising, “No children, including teenagers.” I decide not to enter either.

Settled into our accommodation, I give Graham the present I have brought down south with me. It is a book of photographs of the Port where we live. I also give him the story of us that I have written. A small part of me feels on show, as if I am handing an assignment to a teacher. What grade will I receive? The story is called Seven Thousand Three Hundred Days.

I write us a few thousand words. Our story. In my words. For him. Unpick, unravel. Having gone to the archive, the narrative springs forth. A fresh, new image. After reading, he says, “One day we will give Jasper the story.”

When I told Jasper that I was writing the “story of us” for his Dad, as a gift, he thought it was a “dumb” present. “I hope you are going to give him something else too.” But the story would have been enough. It has weight and substance. Like developing a lost reel of film. It unlocks. In staccato images an animation of our journey leaks out. In third person, then in first. It moves him. Relief. For a moment our faces are smooth again. His hair is long and mine is short. We don’t need glasses. Not a cardigan in sight.

We walk the circumference of the Big Brook Dam. It is paved and easy. There is abundant moss. It is no Dove Lake. Fallen leaves make the path their canvas. There are green weeds in motion under a foot bridge. Like the tendrils of a drowned river maiden, they wave languidly in transparent water. The air here is different from the city air we are used to in Fremantle. There is no salt. There is no industry. No smell of trucks or train. No scent of scared sheep. The air is motionless. Like each molecule pushes its neighbour far away. Holds it at arm’s reach. Fremantle air is laden with salt and sea, feels heavy with the life of the port, clingy and jostling. Here the air feels cleansed by rain. Standing alone, drenched through. It feels see-through, like the most polished of panes. 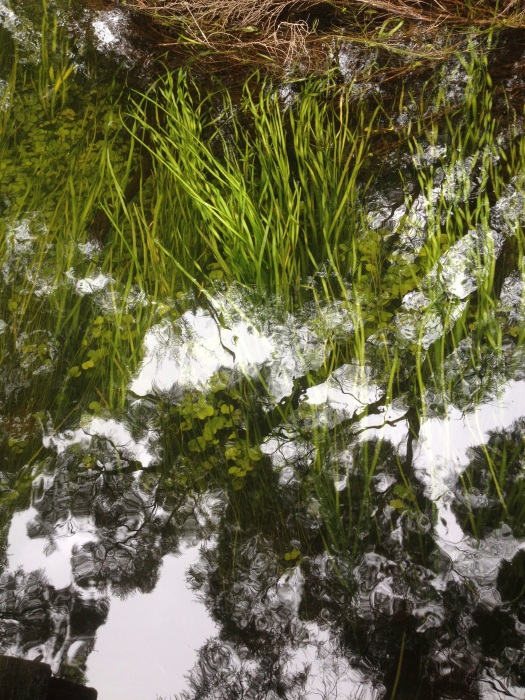 At our special dinner on the long table at Foragers we are seated next to a couple on their “baby moon.” Who knew there was such a thing. And next to them are some locals, Billy and Elaine. Elaine is an artist. On their property she films the decomposition of a dead kangaroo on a security camera; watching the animals come to the carcass and slowly dismantle it. “It’s good for my work,” she says and we know exactly what she means. The couple on the “baby moon” are wishing for an infant that sleeps all night and never cries. We all have a laugh about that.

At Foragers there are Wessex Saddleback pigs in a paddock. They have mud. They have a hut. They are lean and jaunty. They come to the fence when you go by, curious, thinking you might have come to feed them.They are busy with their snouts in the dirt.

On our drive home we come across a juvenile hawk standing by the road side. It does not move as we drive by. We turn around and go back. Sure enough it is injured. It cannot fly, but merely flaps a few feet in front of Graham as he attempts to catch it. He snares it under a billowing rain jacket. We inspect it for injuries and can feel its crunchy bone beneath the skin of its wing. Its keel bone tells of its struggle and suggests it has been injured for a while. We doubt it will make it, but the beauty in its eyes tell us to try. Certainly it will die if left to fend for itself by the side of the road. Our plan is to take it to the zoo in the morning. But in our care it succumbs too. A few hours after its rescue it flaps noisily inside the box and then is found dead. Jasper has not even seen it alive and is saddened to be shown the body of the dead thing. He names it instantly and wishes to bury it. Graham wants to let the worms work at its head to reveal its white as white bird’s skull. I, too, can see the value in that.