Leunig asks himself, “What is this?”

It is his way in to everything.

He describes his childhood as one of benign neglect. He grew up in a working class family with four other siblings. He played in paddocks on the suburban fringe. His playground was the rubbish tip. As a child he started a fire and burnt himself severely enough that it took him six months to recover and learn to walk again. He nearly lost some toes. His playthings were a dog and shanghai. He pinged at tin cans. He says it taught him much; trajectory, velocity…I can imagine him. A mop of wavy hair, poking a stick at rubbish, asking himself, “What is this?”

He had a duck, bought as a fluffy yellow duckling. It imprinted on him. It followed him. He likes ducks. He likes their rounded beak. He likes that it is does not peck but rather dabbles. Non-threatening. To him ducks provide the way forward.

He doesn’t look for meaning. He admires the musician, who, in making music is not asked to explain its meaning. They are free from that kind of scrutiny. To the musician mystery is allowed.

He has been able to stay in a childhood state of wonder, asking, as he looks at the world, “What is this?”

People in the audience are hanging on every word. They lean forward on their lecture theatre seats, tipping towards him, craning. The man in the row in front lifts his glasses and wipes his eyes. People are hungry for his simple wisdoms, given like small morsels. We are the ducks and he throws us satisfying crumbs. He tells us “hang on to your childhoods.” All the aged people in the audience murmur in agreement. But their childhoods may already be lost to them. How to get them back? He talks of wonder, dreaming, mindfulness. It is what a child does without thought. He needs no courses on how to do it. No meditation retreats. A rubbish tip, a duck, a pencil and a piece of paper will do.

Leunig sees the pathos in things. This is what attracts him. As a child he saw two men engaged in a fistfight. A drunken brawl. It filled him with shock and sadness. Again he asked, “What is this?”

“Love your enemy,” he tells the audience. War doesn’t end on the battlefield. Deaf in one ear, he could not be conscripted to go to the Vietnam War. He had been prepared to go to gaol as a conscientious objector, but in the end his disability prevented him from having to make a stand. “They took the wind from my sails,” he says.

He failed Year 12 twice, he tells us. The second time he did worse than the first time. Someone asks him why he continued at school if it was so hard for him. Wouldn’t he rather have stayed home? He says he wanted to be with his friends and that he had some worthwhile teachers along the way. He liked being there. It didn’t matter to him that in the end he hadn’t passed the exams.

It is a hot sticky day before the crossing of Cyclone Rusty. I have returned from Kitchen Garden where eggs were marbled in a pot of black goo – star anise, soy, cassia bark, black tea and more. The hard-boiled eggs were cracked and peeled and inside the egg white had turned beige and brown filament veins mapped the ovoid. Like wonderfully cracked porcelain. Like terrazzo. I felt like Leunig might on viewing the beautiful eggs. What is this? 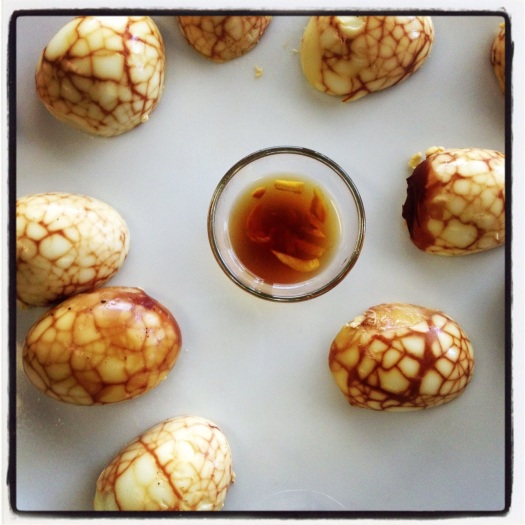 And how much Leunig would have loved the sago pudding?  The minature white balls are like miniature stuffing for a bean bag. The kids can’t help but let them run through their fingers, over and over again. They are white and hard, but cooked they turn into translucent beads. They are sticky and gooey and have no flavour – not until mulberry syrup and coconut milk are added. The mulberry syrup is a deep dark purple liquid. Viscous. As it gets added to the sago it turns it mauve. It is the colour of the storm cloud, the one that is heading our way. It still isn’t flavoursome, but it is delicate and strange in the mouth and everyone has an opinion. It is a bead. The tapioca is more about texture than taste. It awakens another sense. To the children who made it it is magical. The artist-child holds one between a finger and thumb and says to the little glasslike ball – I call you Nemo.

One Reply to “Leunig in the Kitchen”