Michael Pollan knows a thing or two about food. He has been writing about eating and the dilemmas of making food choices for some years. He has thought about the moral choices, the health choices and the political choices. But strangely, until recently, because he didn’t really cook that much, he forgot about the soul. Since reconnecting with the basics in his kitchen he has come full circle and discovered there is power and real creativity in cooking. Getting ingredients and making a meal from scratch anchored him to the planet and what the planet needs from its guardians. It gave him connection. We cannot simply keep taking.

In his latest book “Cooked” he writes, the single most important thing we could do as a family to improve our health and general well-being – was to cook. Something as simple as cooking for your family might also end up making the western world’s food system healthier and more sustainable too.

Wouldn’t Michael Pollan be impressed with the SAKGP. It would be right down his alley. In the kitchen today a child knew instantly that the white bulb with the fuzzy green top was fennel. And how come it smells like licorice? All senses alive. Unlike the six-year-old American children who, when asked by Jamie Oliver, what were the names of various common vegetables, stared blankly back at him, unable even to recognise a tomato from a potato. Their food comes packaged or frozen or wrapped in paper and delivered out through a hole in the wall and then wolfed down in the car.

The wonderful thing about the kitchen is the noise. Engaged and cooperative. Happy noise. It has been six weeks since this class cooked so there is a buzz in the air. The routines are a little rusty. Are you a Melting Moment or an Afghan? What group are you in? If you are in the garden this week we need to tend the worms. Children are busy. Some prefer the garden. Others want to cook. Some (believe it or not) are actually good at cleaning up. Some one grazes a knuckle with the grater. Yes, cooking is sharp. Stoves are hot. Onions sting your eyes. Swimmers goggles hang beside the bench for those who can’t take it.

A salad of winter vegetables is made from finely sliced cabbage, both green and purple, and apple and carrot. Then fennel too. The dressing is honey and mustard. But let’s not stop there. Let’s collect fresh herbs from our garden and pluck the leaves from the stems and add them too. Then we pound some pepitas in the stone mortar to add a crunch to the salad. Lets sprinkle it with poppy seeds.

For afters are oatmeal biscuits with cinnamon and brown sugar. Cleaning up is to be done before a biscuit is taken and whisked away into the playground. The kitchen aid does the creaming of the butter and sugar. One boy thinks that because his home doesn’t have this machine he will be unable to replicate them. Just use your hands, assures Lee. Squish it. Let the butter come to room temperature. Then, just as if the butter and sugar were play dough – it will come out just the same. The mother agrees. She could never lift down the machine from a high cupboard when she was little and did the creaming with a wooden spoon. It can be done. And less washing up. Lick your fingers.

Back by the worm farm the boys are sifting through with gloved hands and extracting the garden rubbish that has been incorrectly placed there. It means getting close to bugs. Telling the less brave that the bugs can’t hurt you. Despite their mutated look. Cockroaches and slaters have taken up residence and are stealing the worms’ food. Girls are skittish about getting close to the insects but after some encouragement they too have their hands in the dark rich organic matter. Everyone is learning to try stuff they would not normally do.

The mother on oatmeal cookies is using a spatula to scoop every last skerrick of mixture to form the biscuits. Witness the children hoping mind control will make her stop short. The hyenas stand by, pining for a spoon to lick or a dirty bowl to run a finger round. There will be barely a morsel. They watch as the temperamental oven manages to bake the clumps of muddy mixture, turning them darker and crisp, and emerging almost as tasty as the uncooked dough. Yes they would try this at home – with or without the help of a mixer.

And as Pollan says, what he learnt about cooking is this; “that cooking gives us the opportunity, so rare in modern life, to work directly in our own support, and in the support of the people we feed. If this is not “making a living,” I don’t know what is. In the calculus of economics, doing so may not always be the most efficient use of an amateur cook’s time, but in the calculus of human emotion, it is beautiful even so. For is there any practice less selfish, any labour less alienated, any time less wasted, than preparing something delicious and nourishing for people your love?” 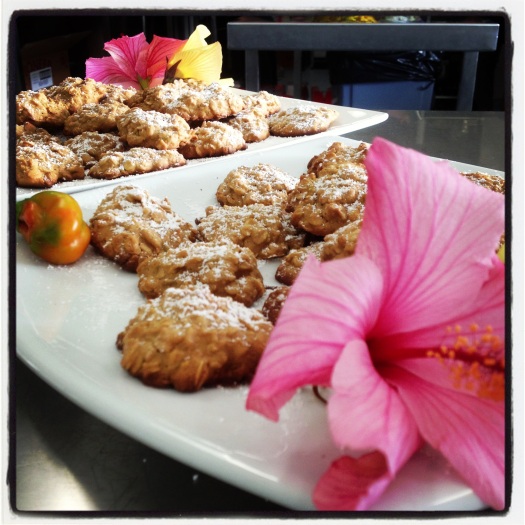 One Reply to “Pollan in the kitchen…”