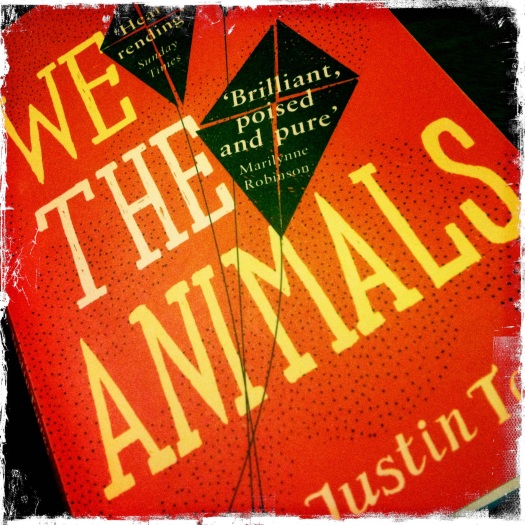 “We The Animals” is a slim book – almost thin enough not to be a novel at all, but a novella.

But it is so very rich in its thinness.

It is taut. Every word has its place and only that place will do. Like a perfectly tuned musical instrument.

I loved this book from the moment I picked it up – its sentences spoke to me instantly. I was there, in the grubby house with the Puerto Rican father and the white mother, locked into some struggle that children can’t name. All the while you have a sense of dread, stretching the skin of the balloon – bursting is inevitable.

“We wanted more. We knocked the butt ends of our forks against the table, tapped our spoons against our empty bowls: we were hungry. We wanted more volume, more riots. We turned up the knob on the TV until our ears ached with the shouts of angry men. We wanted more music on the radio; we wanted beats; we wanted rock. We wanted muscles on our skinny arms. We had bird bones, hollow and light, and we wanted more density, more weight. We were six snatching hands, six stomping feet: we were brothers, boys, three little kings locked in a feud for more.”

Then later in this excerpt the boys attempt escape from the chaos of their home life;

“We reached an empty field, tossed our backpacks onto the grass, and set up camp. Wind whipped the tips of our ears and stole a plastic bag right out of Manny’s hand. He thought it was a sign and fished though our supplies until he pulled out a tight, fat roll of twine and three black plastic bags. We made kites: trash bags on strings. We ran, slipped, the knees of our dungarees all grass stained, we got up, ran, choked ourselves half to death with laughter, but we found speed, and our trash kites soared. We flew for an hour or so, until daylight fully buried itself into night and the light sank back, except for the stars and a toenail clipping of moon, and the kites disappeared, black on blackness. That’s when we let go,and our trash kites really soared – up and away, heavenward, like prayers, our hearts chasing after.”

It’s the kind of literature that delivers you bellyside to the narrator. We never even learn his name. But there we are  – in someone else’s skin. At times you want out, it is just too grim. But then that’s good writing. If this is the kind of writing you like then “We The Animals” is for you.

One Reply to “from “We The Animals” by Justin Torres”