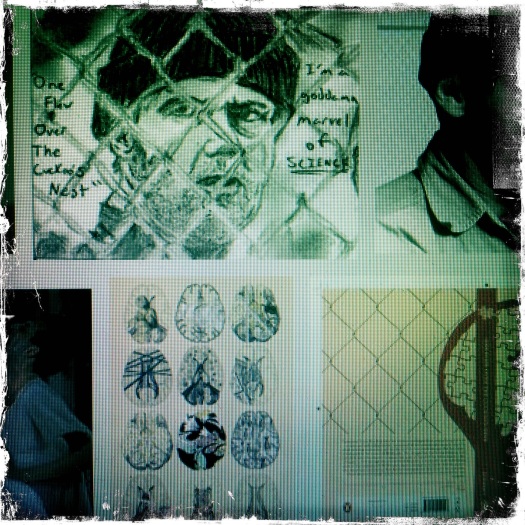 I am driving home from work listening to local radio’s Conversations with Richard Fidler. It is one of those chatty programs you can switch on and immediately you’re engaged – like eaves dropping on a couple, deep in chat, seated next to you at a restaurant, while you await your own partner.

Tonight, when I enter the conversation, he is talking to a parasitologist, Paul Prociv, about the life cycle of the rat lung worm and how there is part of the life cycle that requires development in a snail or slug. The larvae develop for a couple of moultings in the slug before the right host (a rat) consumes the slug and then the larvae develop into wrigglers that make their way to the brain or spinal cord, on their way to a large vein which will eventually channel them to the right ventricle of the heart. If, instead of a rat eating the mollusk, a human accidentally does so, the larvae will still go on their merry way, coursing through the tissue of the human brain and spinal cord. But, in the undesired host the damage can be catastrophic, leaving the person in a coma or paralysed. All from eating a slug.

I am repulsed. I am taken in.

I think of my careless washing of the lettuce. I think how easily a little slug could slip through into the salad. Eosinophilic meningitis here we come.

The parasitologist talks about the success of parasites. How, as a group, they out number all other living things. The word derives from medieval France meaning – some one who eats at the table of another. That sounds benign enough. And mostly they’re not trying to kill you. As Richard and Paul converse on the wonders of parasites they fall upon the word “cuckoo.” And then the cuckold man – whose wife’s has had someone else’s children whilst he is busy providing for what he believes are his. And the cuckoo birds who deposit their eggs in someone else’s nest for another bird to do the work of raising.

Their conversation drifts in another direction – to Paul’s family from Russia and his father’s own escape from a Stalinist regime.

I am still on cuckoo.

The obligate brood parasite cuckoo bird places its heavy shelled egg (some times disguised and other times not) into the nest of another bird and the cuckoo’s egg hatches first. Most hatchlings are able to obliterate the other eggs – either dispatching them out of the nest or outgrowing the other chicks  by squawking louder for attention and food.

The word mesmerizes over and over. The feel of it in your mouth. The look of it on the page. I think of “One flew over the Cuckoo’s Nest.” How the word cuckoo has come to mean crazy because of its link with this book. How brilliantly does Jack Nicholson play crazy? Think “The Shining.” Redrum. That sound of the wheels of the plastic trike moving from carpet to wooden boards. You know it. How cuckoo isn’t as crazy as crazy comes. Rather it’s a fraction bit off. Tilted. Who really minds being called a “little bit cuckoo.” Maybe it’s even a kind of compliment.

Buying grog at the Coles liquor shop, after my shop for dinner (salmon, dill, cream), two drunks are buying their booze. One has two large casks of cheap wine and the other a couple of bottles of fortified. Despite being at the counter before them I am overlooked and besides I don’t really mind them being served first. I am busy spying on the one with the crutches’ gammy leg. Doing my own kind of cuckoo work. He has a busted foot. He has a dirty bandage on it. He tells me the cast has just came off today (surprising considering the colour of the bandage) but he is still worried about the sullying (my word not his) of his skin. “It’ll take time, “ I say. He says it’s been good while already. I consider asking how the cream sherry helps. But that would be straight out cuckoo.