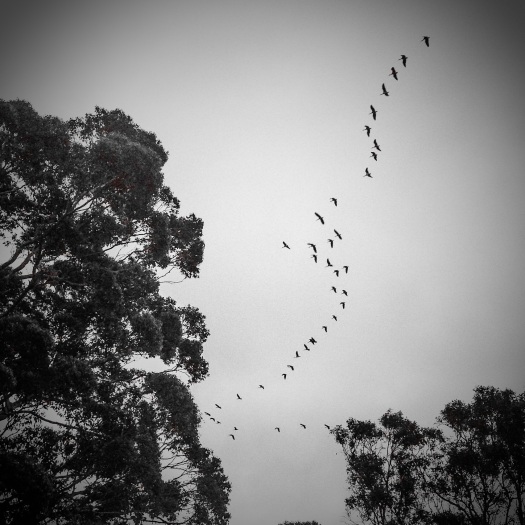 Pat Metheny plays. I stare at the knots in the wood of the orange pine ceiling. On my single bed. I remember studying ceilings; a past time of the spinal patient.

I think of yesterday.

On a quad bike. Held between the thighs of the Giant. Meanwhile the Cook roasts the chickens and tomatoes with fennel. Roasted sweet potato encrusted by macadamia crumble. Stone fruit tarts for after. Her kitchen is her castle. Stainless steel. Plywood. His is the scrub. The glades. The sandhills.

But after all what will I remember?

Freedom. Air rushing past. Being without my chair. The spray from the ocean waves as we hurtle along the wet shoreline. Hubert, tan galloping, keeps pace 38,39,40km/hr. His ribs showing. Tongue lolling. Eyes of an athlete. Hound. Rescued, he must think he is the luckiest dog alive.

After us comes the eleven-year-old on a tinier bike and then my Small Good Man. The eleven-year-old wears a motorcycle helmet that makes his head look like a pumpkin. He putters. But he’s getting the hang of the lean. Always into the hill. Faster too. He hits a bush. He learns to reverse. The Giant tells him whatever happens don’t let the handlebars hit the ground.

It is another lifetime ago since I straddled a machine. European pine forest roads, mountain switchbacks and black ice. A tasselled leather jacket because I could. Thighs that clenched. Now, I don’t feel the seat.  Mine is a flaccid lower half – legs like the stick insect the boys later find. When he lifts me my limbs dangle like laundry off a line. This is a different kind of pillion. Think disfigured damsel. Wedged. With my right hand I link his forearm and he grips me around the middle. His brachium is like a leg about me. He is my seat belt. My saddle. After he says, some embrace.

There is a grove of peppermints and a fairy forest; a place for taking children and singing lullabies to the chugalug of an engine. The black trunks and the feathery green leaves. The Giant and the Cripple hum along. There are reeds and rushes and swarms of small midgies. The ground water is close and the mud gluey. There are gouges raked into the earth where a tractor bogged. But on the bike it is all just a surface on which to ride. A platform to view the rear of a big roo bounce away. Hubert takes chase. He’s called back by the hoot of the horn. Lean forward, scoot. Lean. Fly.

A dragonfly hitches a ride to a giant’s woodshed. A dead snake twisted into dried leather hangs from the wire fence.

He lifts me from the bike like I am a sleeping child to place me back in my wheelchair. Like laying a toddler in a pram. I am lofted high. A memory of being plucked from a pony ride floods back. Being placed on your feet by a large man. A momentary lapse between you and the earth. Like stepping from the rollercoaster.

Later at the table we talk of surviving house fires and losing stuff, of book edges turning sooty but not burning right through. Of losing to fire the exact same George Haynes’ etching of a naked woman under the dappled light and shade of a south Fremantle tree. Of waking to the sound of picture glass cracking. The Cook once found an unexpected photograph of me in the rubble of another house fire in a whole other place. She picked the photo from the detritus and placed it safely in the elbow of a tree. The man and I had long since parted but somehow the image of me was there for her to see. And rescue. 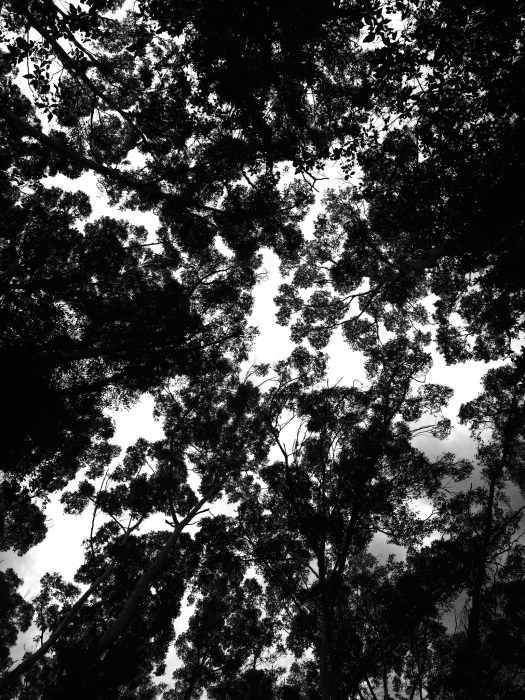 Pat Metheny plays the theme for Cinema Paradiso. Guitar strings squeak. Hearts break. A child hits a tennis ball against the wall of a mud brick house. A dog lies on a three-dollar charcoal wool blanket from an Op shop in Albany where white-haired women helped a homeless man clothe himself. A Small Good Man says the best reception for the phone is in the toilet.

He works outside on a large jarrah table, in this pocket of still bush. He has postcard sized images that he shuffles about. They are photographs of another forest place. He worked long hours, from dawn till dusk, but it is the crepuscular shots that form the ballad. A place of mountains and the people that are drawn there. More treacherous than here. Beauty turns to tinder. He stops and looks again. He moves them like someone arranging cards for a magic show. Eventually they settle where they will hang on a gallery wall to speak a narrative of place.

Assassin flies make roads in the air three inches off the ground as if involved in a grand prix circuit across the grass. Sometimes a magpie picks one out of the air. Teaching its baby, who squawks beside it.

A large karri stands near the house, orange spirals about its trunk. Some branches are dead and grey. It is bigger than all the other trees. It spreads itself wide in ownership. Beneath the karri are peppermints and kangaroo paws and smaller gums. Closer to the water the chalky white of the Paper Barks can be seen. The karri’s rusty skin catches the sun and shines. It is windless but still there is the sound of bark falling. Like footsteps in the forest.

Sometimes a distant cow can be heard, baying morosely, as if for a lost calf. At dusk the waders from the mud flats take to the skies. The sound of their flight suggests air is not nothing. They go to their place to sleep high in the trees. Tomorrow they will stalk the mud once more.

7 Replies to “The Giant, the Cook and the Cripple.”