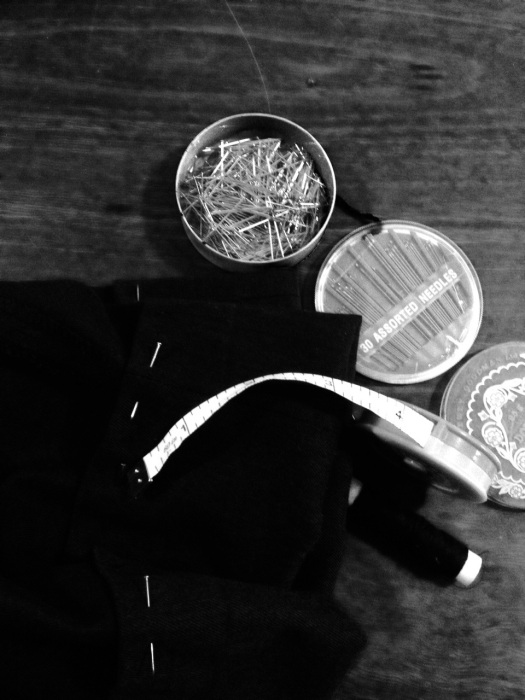 Today I have traces of my mother running through me.

For lunch I cooked corn fritters. Jasper ate them like I did at his age – pulling them apart with his fingers and dunking them in mayonnaise. After we might have settled down to an afternoon of Tarzan or else a Dean Martin and Jerry Lewis comedy. The square box television. Instead he has a comic. It has absorbed him all day. He leans half-on and half-off the couch in what looks like an uncomfortable position. He is still in his pyjamas. He has the dog for company. Graham attempts brioche that fails. Old expired yeast. Or maybe he’s just not a baker. But the pulled pork for dinner has slow cooked all day and…

After corn fritters my Dad would have taken to his garage. My mother might have watched the movie with us whilst writing her letters on her lap. Scrawling off letter after letter on pale pink notepaper. Some letters to friends, other searching for autographs and letters back.

I take Jasper’s long grey school trousers up by three inches. I take the waist in too. I use a needle and a thread. I jab myself more than once with a pin. It’s not a great job, but it’ll do.

I take the dog for a walk because I need a break from the study (how does a ewe recognise its own lamb, the flehmen response in cattle…) and the moment I am out of the house the rain starts. It is soft. I think gossamer. I think georgette. Walking along I try out words to describe the sky. A favourite distraction. The old skate park is empty now there is a new one in town. But a small boy takes his father there because it is empty. He has it to himself. No teenagers. The rain softens and fades and soon is gone. It does not sink through the dog’s heavy wire coat. Little balls of wet silver rain just travel with him. Rain brings memories always. Wet roads do that. Wafts. The jacarandas have a scent when they’re wet. I am back in my yard beneath the trees where the chooks scratched at the dirt. My dad is in the garage and there is the smell of motor oil. Rain makes the train louder too. Smell the metal off the tracks.

Scent is like that. It pushes its way forward – just sometimes.

For animals scent is everything. A trained canine is capable of detecting a finger print left on a glass table six weeks earlier. Having two nostrils separated by just several millimetres is enough for a dog to discern from which direction the odour is coming. Sometimes us humans can barely smell smoke. Our vestigial noses. Hardly smelling a thing in comparison. To the rest of the animal world we are almost anosmic. Yet. Sometimes we do. When we smell it feels ancient. The world gets big and small at the same time. We are connected. Suddenly thrust back into childhood. A molecule of odour passes through membranes and assaults our brain as if it is memory itself. This might be a fraction of what animals feel and know as they busily sniff and sneer at each lamp-post, each blade of pissed-on grass. For them it is more than memory. They are sending email, on dating sites, telling each other of their sexual availability, their state of oestrous, whether or not they can tend offspring or fight off other suitors.

Chipotle chillies are smokey flavoured and remind me of pimento and a meal I once had in France full of intestines and innards. Visible amongst the red tomato sauce was the tell-tale texture of an animal’s stomach wall. It was inedible. The smell reminds me.