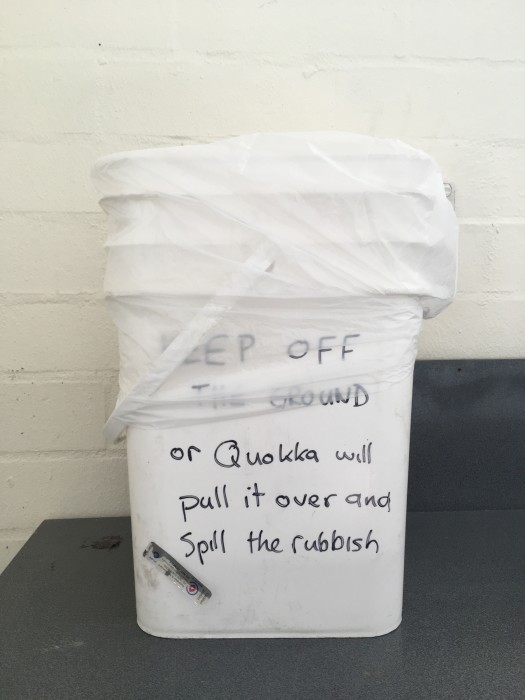 It’s all about the silence. Although it isn’t silent when you listen. There is the slap of the sea – constant, background. There is the screech of children. Sometimes a meltdown from the chalet behind. And always the bang of screen doors. There is the latch on the gate, the diesel hum of boat motors, the flip flop of thongs on bitumen. There is the crash of glass bottles entering the recycling bins, the whistle of a boatie to the landlubbers on shore. A father chastises a son for talking back and a mother attempts to smear sunscreen on a wriggling, moaning child. But there are only a few cars. There is a rubbish truck. There are no horns or sirens. There are bicycle bells. There are few telephones ringing, except for those timing the cooking of the pasta.

The Cairns – they come every second year. They wish for yearly. They are Sydney-siders. Big city people, but lovers of the simplicity of Rottnest. We will always have Rottnest. Rottnest has seen new partners, seen pregnancies and babies added. Beds have been upgraded with bed runners and better mattresses. New tiles, new lights (still too bright), a change in couches (too hard) and outdoor balcony seating. We no longer can move a couch from the chalet onto the balcony, so instead order a foldaway bed and install it out there. The Cairns have a three-bedder and so an expanse of balcony and extra large kitchen and fridge. The three-bedder is looking very good. Another Perth mother arrives with a lanky girl child. She makes wonderful curry and goes to Mass. She talks about her street where she has moved from the wealthy to the poor side, since splitting with her husband, and how wonderfully refreshing the poor side is. They have a gifting shelf in their laneway where people exchange all manner of books and knick knacks. Since separating she has brought back inside a beloved Jarrah table, a family treasure, which was relegated to life on the porch in the home she shared with her husband. A teenager has not come this year – but two small boys are now two older boys, only inches apart. Still boys. Still lovers of cricket and riding their bikes.

Day One Monte stacks it in front of the Visitor centre and requires fixomull to a scraped knee. His diabetes is no longer new. His pump gives him and his parents freedom from needles, but still requires the input of calculations and knowledge of what has been eaten and of how much carbohydrate it contains. It is second nature to Monte to count everything that goes into his mouth. Every chip, every BBQ Shape. “26 Shapes Mumma.” He has a record low of 1.8 one day on the balcony, appearing to the adults unlike himself, a callow meek Monte declares, “I am Low.” Low he is. He is told to sit. Troy gets juice from the fridge and two glasses are downed. In minutes he is back to over 6. We, the diabetes rookies, are nervous and ill-equipped. The parents and the child have it all down pat. No one panics. Juice and jubes and the blood glucose is back on track.

Monte, diabetes or not, is determined to do well. He is competitive with everything. He aims to be the best. He is sore at losing and when things don’t appear fair. He is like a wind-up toy with an Ever Ready battery. He keeps going despite being red-faced and hot. Sometimes his face folds and he hides himself under a Turkish towel on the beach. Sometimes he won’t swim. “Chop Chop young son,” is called to Troy as he stand up paddle boards towards the shore, after-all another man is required on the cricket pitch.

Raff is a harder nut to crack. Brilliant light blue eyes and wry smile. Tells it like it is. He says he is bored, but also that he is having the best time. He rejects the application of sunscreen or the wearing of a hat. He plays cricket but won’t watch it on the telly. He loves school and can’t wait for the holidays to end so he can go back. Both boys love Jasper and he plays with them well, with a patience he does not have for his parents. On the last night they play a game where they must search for each other while trying to get home to the base without being caught. Raff: “The most intense game ever.”

Troy’s story – Snoopy (said with a lisp) and Mr Michaels. 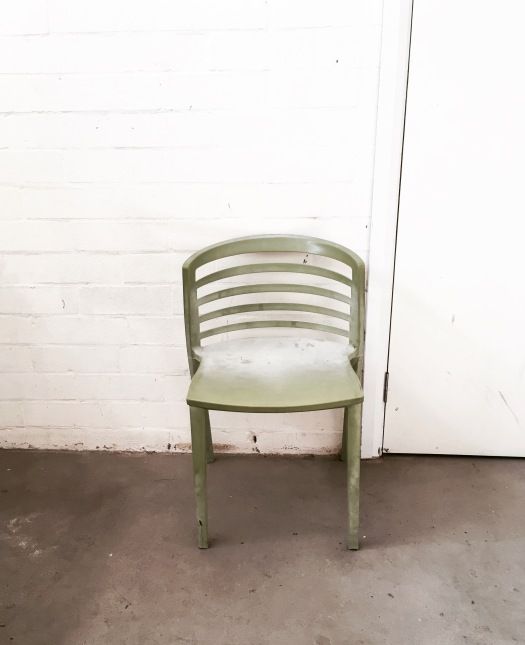 My lip is burnt and it makes me touch it. I worry it with my front teeth.

Like the teenagers. They too have burnt lips. Mothers give them cream, similar to what used to be applied to nappy rash. We swim at Little Parakeet and are joined by other old friends. They too chaperone teenagers. We reminisce briefly at what Rotto was like when our children were babies. When at nighttime they slept and we barbecued attached to baby monitors. They have a teen girl who has taken to “Fuck you” and giving them the finger. We have a sullen, string bean boy. More broody and somber. Disdainful of questions. Irked by any attempt of mine at humour or dance. Even if it will only be seen by him. My mere swaying with the beat can send him into a frenzy of STOP MUM. Strangely it only makes me want to dance more.

So. Two middle-aged couples on the beach while our teens roam about the beach, without energy, without vim. Sapped. Arms flop about their bodies like lifeless limbs. A French couple squabbles with a small boy having a tantrum on the sand. An open hand strikes the boy. Leave him be, we all think. It is easy to parent from afar, when you are not in the thick of it. Perspective is clear, a way forward, so easy to see. But when you are amongst it, not so much. What should you do when they unleash the “fuck you” we ask, but never seem to get an answer. Perhaps they too, don’t know. I guess we will muddle through, like we have with all the previous parenting woes, only to find out later that, despite trying our best, there was indeed a less painful way. Later we joke we don’t know which we would prefer – the fuck you or the silent moping. They tell the story of threatening to remove teen girl’s bedroom door if it was slammed one more time. Slammed hard. Makita comes out. Door hinges unscrewed. Later, on opening their own bedroom door it nearly falls off as teen girl has loosened its screws with a Stanley knife. Touché, thinks Dad. A valid response to authority.

I love Australia, but not when it’s shoved in my face. I don’t like balconies festooned with triangles of Australian flags. I don’t like boats with massive billowing flags fit for a parliamentary flagpole. Boats anchor – A Salt Weapon, Reel Xtreme. I don’t like Aussie Crawl played over and over again, or Men at Work, whilst middle-aged men in Australian flag hats and boardies sit with a beer and sing the chorus and play air drums. Later said man will wander from the beach to the shops and take a piss on the brick stairs between the chalets. Choice. When two blondes, fresh from their shower, with large glasses of white wine pass under our balcony to join the Men at Work boat, I ask politely if they might relay the message to turn their music down. The glare – long and hard eyed, the clenching of their teeth somewhere behind their closed lips, the lack of a verbal response, the cackle when they reach their friends, their pointing me out as “that lady on the balcony” was all a tacit agreement that we do no longer (if we ever did) like each other. It makes me think of dogs and their mostly excellent reading of each other’s body language. As humans – we think we rely on verbal cues – but we are just as much influenced by a look, a small movement of the lip or eyebrow. So in dog language we gave each other the “look away.” Don’t mess with me. 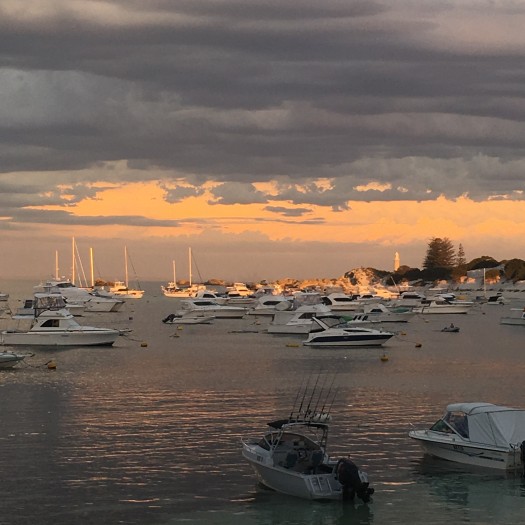 On the mainland it is sweltering. A seaplane, supposed to be part of the sky show ahead of the fireworks, turns without enough speed for a hot windless day, a wing dips, a motor stalls, and it plunges like a poorly made paper plane, into the river, killing pilot and passenger. We think of Big Steve (back in the US) and of his job sorting out the cause of any similar “fatal.” G says he would hate the way a passenger died, because of a pilot’s inexperience.

The sky did its thing tonight. After a hot day the storm clouds have arrived and made a sunset of rose and mauve. The wind, which was playing havoc with the Big Bash TV reception, decided to fade and allow some uninterrupted viewing. It must be hot on the mainland. Cricketers are sweating. The distant lighthouse stood solid and beige while the sky all around changed and morphed. A big white voluminous cloud puffed itself up and all around it other darker clouds swirled and spread. The sea turned from soft mohair blue to beaten pewter. My raised stinger welt begins to itch. The fan ticks.

I dream that I am entering a lift as someone with a thin whippet style dog is exiting. Some how there is a cavernous gap between the landing and the lift and of course, as it always is in dreamland, this is not abnormal or a surprise. What is shocking is that as the man leaps across the dark and endless gap but the dog does not. He, then at one side and the dog still in the lift, urges the skinny thing to jump across to him and as it does so he pulls on its leash and its head slips loosely from the collar and the flimsy dog disappears into the dark. A thump is heard as it hits the bottom and then nothing. It is somehow my fault, in my heart, that this dog was afraid to jump, failed to jump, didn’t leave with the man. I wake up, annoyed and made itchy by the stinger welt across my chest. I itch it. Stop. Itch some more. Think of John Turturro in The Night Of.. and wish for a pointed knitting needle. Itch some more. 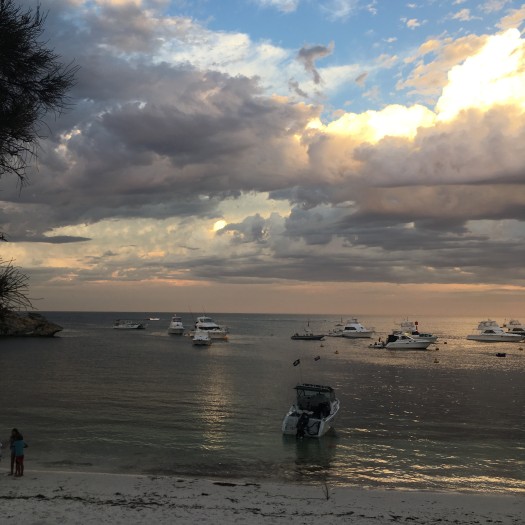